The Flight Plan, the original Partners in Flight (PIF) blueprint for bird conservation planning, consists of four key elements that embody the essential elements of adaptive resource management. To facilitate the translation of continental population objectives into biologically sound, measurable regional and local population-based habitat targets, PIF adopted the Five Elements Process. This process shifts focus from identifying priority species to formulating quantitative estimates of how much habitat is needed, where, and by when. The Flight Plan and Five Elements Process offer a framework for incorporating bird habitat management efforts into installation INRMPs. 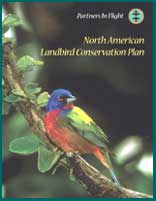 The North American Landbird Conservation Plan, published in January 2004, sets a new standard for broad-scale, multi-species conservation by providing global population size estimates for 448 native landbirds of the U.S. and Canada. These estimates, maintained in the PIF Species Assessment Database, were used in assessing conservation importance of individual species, and immediacy of conservation action required. They were also included to give a sense of the magnitude of the task of meeting Plan objectives, for example to achieve a doubling of a species' current population. The baselines in the Plan recognize that the expansive losses and modifications of habitat since the European settlement of North America are historical realities that are not likely to be reversed to a significant extent at the continental level. Another innovation in the Plan is the creation of digital range maps for all landbirds. In addition, maps were created that summarize migratory connections between individual U.S. states, Canadian provinces & territories and the regions that support the same birds at the other end of migration. The maps give a general picture of where birds go, providing a starting point for targeting action. With this information in hand, decision-makers can explore partnerships and mechanisms that would help further conservation action outside their borders. We can now portray and analyze a wealth of information about birds distribution at the continental level.

As population estimates for the current plan continue to be refined, a tri-national (including Mexico) assessment of 893 species, or nearly 10% of the world's avifauna, is also being produced. With the addition of Mexico, additional species needs such as endemic species, the cage bird trade, and the critical value of wintering habitats will take on much more prominence.

Population size is a central measure in most species assessment schemes, particularly those aimed at identifying species with a high risk of extinction. Small populations are generally considered more vulnerable than large ones, even among those species not immediately at risk. Partners in Flight includes global Population Size as one of several factors assessed to determine species of high conservation importance, using an order of magnitude scale to assess relative risk.

Meeting continental objectives requires actions at regional scales, and many requests were received to break the continental population estimates down to smaller geographic scales, where they could be used as a starting point in setting regional objectives or judging the magnitude of actions needed to meet those objectives. AFWA state reports provided that breakdown for priority species in each U.S. state. However the data behind the estimates have not been widely provided, making it difficult to interpret or revise estimates in light of other regional data and expertise, or to use the data for other related needs. The PIF population estimates database makes these data broadly available, and provides a base for future improvements to the estimates.