Determining whether munitions may be present in areas where dredging will be conducted is an important aspect of managing dredging projects.  In most cases, particularly along the eastern shore of the United States and the Gulf of Mexico, one should assume munitions are present.

If munitions are known or suspected to be present, managing the explosive hazards posed to dredging operations is critical to ensuring the safety of workers, dredging and other equipment and the public.

Dredging operations often result in a variety of munitions being drawn into the dredge and dredge material.  The munitions present may be the result of historical munitions disposal operations, live-fire training and testing, accidents, combat or losses during logistical movements such as underway replenishments.  At many areas where dredging activities have occurred, crews have encountered both discarded military munitions and unexploded ordnance.  In some cases, munitions are encountered in dredge spoils well after dredging operations have been completed.

Managing the potential to encounter munitions during dredging projects is prudent.  Failing to do so can result in injury or death to crews or the public, damage to the dredge and associated equipment, and be costly.  Where dredging operations have resulted in munitions being placed in beaches during shoreline stabilization projects, the costs of removing the munitions from public areas has been much greater than that of the entire dredging project.  However, such costs are immaterial, if someone loses their life or suffers a serious injury because of inadequate planning.

Effective management of dredging projects, particularly the potential for munitions to be encountered, begins in the permitting, planning and contracting process.  The planning phase should include sufficient research and, when necessary, a geological survey to determine whether the borrow area or areas where dredging will occur may contain munitions.  However, it should be recognized that many areas that contain munitions are undocumented.  This is true for several reasons, such as:

Regardless of how munitions reached their resting place, inadvertent recoveries during dredging can result in detonations that may kill or injure crew members, damage equipment or place the public at risk.

To protect yourself, your co-workers and the public, know whether munitions-related activities occurred at your dredge site, and follow the 3Rs of Explosives Safety: 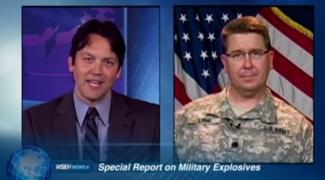