Some proudly display these munitions, giving easy access to family members and children. Others who put them away have long since forgotten they exist.  Over time, trophy munitions can be found in closets or old trunks, collections or displays. Unfortunately, many are only discovered after a tragic accident occurs. All too often, Explosive Ordnance Disposal (EOD) or police or fire department bomb technicians are dispatched to houses, parks, and playgrounds to identify and dispose of munitions.

No matter what you call them - souvenirs, war mementos, duds, simulators - munitions are dangerous by design and should never be considered safe to handle. Protect yourself, your family and community by reporting munitions to the police for recovery. Disposing of munitions in other manner is unsafe.

An incident several years ago highlights the risk. While playing with a munition that had been kept as a “conversation piece” for over 15 years, two children were killed and several others injured. The owner, a veteran who had handled the munition repeatedly, was unaware the munition was live.

Continue your service to our Nation and protect your loved ones by contacting police to have souvenir munitions recovered. The lasting legacy of your service should not be an injury or death caused by a war souvenir. 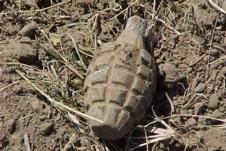 The Department of Defense urges its veterans and anyone in contact with military munitions to follow the 3Rs of Explosives Safety.