Many areas now open for hunting are used or were once used for live-fire training or testing. These areas played a vital role in preparing our armed forces for national defense. As a result of this training and testing, millions of acres in the United States and along its shores are known or suspected to contain munitions. Therefore, when hunting on property the military uses or once used for such training or testing, know that munitions may be present that pose a danger. Because of the danger munitions pose to hunters, some areas on military installations are closed to hunting and other recreational activities.

Munitions should be considered dangerous, regardless of how long they have been in the environment. Munitions you might encounter may be heavily corroded, whole or in parts, buried or covered with leaves, making them difficult to recognize. Even old munitions can kill. As such, never approach, touch, move, disturb or shoot at anything encountered that may be a munition or part of one, but carefully leave the area.

Ultimately, hunters on a military installation are responsible for knowing where they are at all times and for staying within either their assigned hunting area or the hunt boundaries. If you are uncertain whether an area is closed, do not enter it, potentially putting yourself in danger, but carefully leave the area.

Help protect yourself, and make future hunts safer from explosive hazards by following the 3Rs of Explosives Safety.

If you encounter or suspect you have encountered a munition: 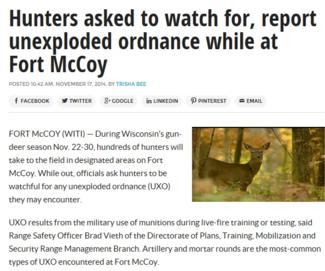