The DoD Recovered Chemical Warfare Materiel (RCWM) Program uses a variety of proven technologies to assess munitions and certain materials of interest that contain an unknown liquid fill, and to then destroy those munitions and materials determined to be RCWM in a safe and efficient manner.  The RCWM Program also has technologies and policies for the destruction of Chemical Agent Identification Sets (CAIS) in a safe and efficient manner.

The RCWM Program continues working with government, academic, and industry scientists to improve the technology used during assessment of munitions and certain materials of interest and destruction of RCWM and CAIS. The RCWM Program RDT&E effort involves a variety of partners, including Sandia National Laboratories, Idaho National Laboratory, the U.S. Army Combat Capabilities Development (CCDC), and contractors.

A critical part of the RCWM Program technology effort is planned improvements of existing equipment. Each system has, as a functional requirement, a routine examination of ideas to improve operational efficiency and effectiveness, environmental compliance, sustainability, and safety. These examinations draw on the gamut of sources and expertise from the theoretical understanding of the research scientist to the “hands-on” experience of the day-to-day system operators. Currently, the Explosive Destruction System (EDS), Transportable Detonation Chamber (TDC), and PINS systems all undergo this cycle of planned product improvement examination.

Once recovered, CWM or munitions and certain materials of interest  with an unknown liquid fill are placed in a Multiple Round Container (MRC), a sealed stainless steel, over-pack that provides safe storage and transport of RCWM. MRCs prevent chemical agent leaks, aiding in the protection of the public and workers during accidents or rough handling. 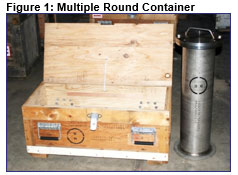 MRCs are specifically designed, tested, and fielded for the transport of RCWM and exceed international packaging requirements. The effectiveness is such that both the DoD and U.S. Department of Transportation (DOT) approved MRCs for the storage and transportation of RCWM in the public domain. 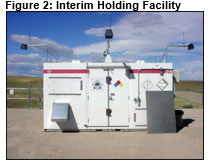 A Transportable Interim Holding Facility (IHF) provides safe, secure temporary storage for RCWM at sites where storage facilities, such as earth-covered magazines, and bunkers, are unavailable.

Over the last decade, the U.S. Army Chemical Materials Activity Recovered Chemical Materiel Directorate (CMA RCMD), previously known as the Non-Stockpile Chemical Materiel Project (NSCMP), developed a variety of non-intrusive, transportable technologies that can be brought to a known CWM item, munitions, and certain materials of interest containing an unknown liquid fill, or CAIS to identify the contents. The mobility of these systems minimizes the need to transport the recovered items, reducing the risk to the public. 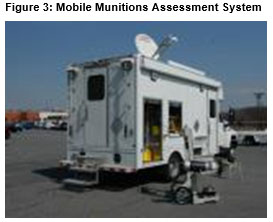 Unexploded ordnance, discarded military munitions, or munitions and certain materials of interest with unknown liquid fills are encountered at CWM sites and test ranges. Although the size and shape of a munition provides an indication of possible fill, a munition type may contain one of several fills. When recovered, the contents of these items may not be easily identifiable.

The Mobile Munitions Assessment System (MMAS) is a vehicle equipped with a variety of equipment and provides physical and chemical analysis of RCWM, and munitions and certain materials of interest with unknown fills. MMAS uses non-intrusive assessment equipment to provide detailed information on recovered items and distributes that information to appropriate authorities, reducing risk to the public, military, and emergency response personnel.

The MMAS units and the equipment on board are part of CMA RCMD and operated by CARA. 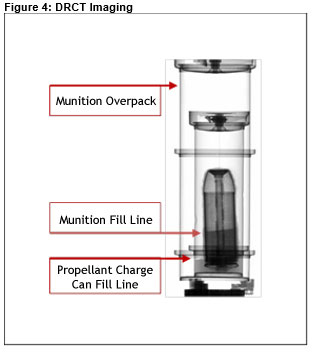 The field-portable Digital Radiography and Computed Tomography (DRCT) system allows response personnel to X-ray unidentified items on site. Operators use this information to make decisions regarding the safe handling and storage of recovered munitions and to assist in content identification.

The DRCT system scans each munition on a rotating platform, providing critical data even if the item is over-packed in a container.

Using image processing software similar to that used in the computerized tomography (CAT) scan, DRCT produces a digital view of the munition’s interior indicating whether the contents are solid or liquid and the presence of any explosive components. Response personnel then know whether the recovered item is a conventional munition or one with an unknown liquid fill requiring further assessment to determine if it is RCWM.

PINS exposes the recovered item, often inside a container, to a focused gamma ray beam. Changes caused by the passage of the rays through the contents produce characteristic gamma-ray peaks, which help determine the presence and concentration of chemical elements. A team of analysts assess the results to determine if the item contains a fill such as a chemical agent, smoke or simulant.

Identifying the contents of closed containers enhances safety and expedites disposal of RCWM. 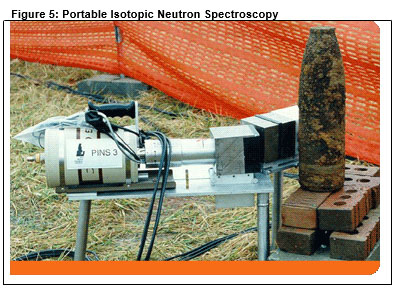 CAIS include glass ampoules, vials, and bottles that contain 4 ounces or less of chemical agents or industrial chemicals. The Army manufactured and distributed CAIS items to military installations around the country between 1928 and 1969 to train Soldiers in the safe identification, handling, and decontamination of chemical agents. Although many CAIS were consumed in training, some CAIS items were buried, an acceptable practice until the 1970s. 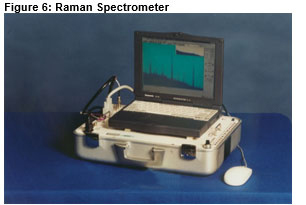 Today the military services occasionally encounter old CAIS in storage or recover CAIS when performing excavations for construction or as part of planned munitions responses. Once recovered, identification of the container contents allows personnel to make the correct decisions as to the proper neutralent to use when treating the CAIS contents.

The resulting output is evaluated by the operator to determine which chemical agents or industrial chemicals are present, enabling environmentally safe treatment and disposal of the contents. 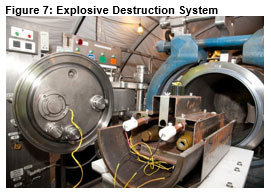 The Explosive Destruction System (EDS) provides on-site treatment of RCWM in a safe, environmentally sound manner. The EDS provides full containment of munitions while accessing and treating the contents and allows collection of samples to confirm treatment goals are met prior to opening the unit.

Designed by NSCMP (now CMA RCMD) and constructed by Sandia National Laboratories, the EDS serves as a transportable technology supporting both planned and unplanned (emergency) operations. Sandia built five EDS units for RCMD, which retains the system’s patent. The EDS units are operated by ECBC.

The EDS 1 entered service in 1999; the larger EDS 2 finished extensive testing in early 2006 and began operations alongside an EDS 1 at Pine Bluff Arsenal the same year.

The EDS uses linear shaped charges to explosively access the contents of RCWM, eliminating any explosive elements before the chemical fill is treated using a neutralizing chemical. The system's main component, a sealed, stainless steel vessel, contains the blast, v 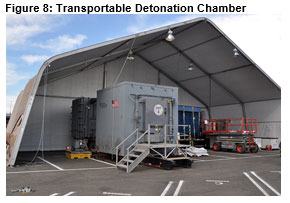 apor, and fragments from the process. Once the chemical fill is neutralized, the EDS is drained and the residuals are sent to a permitted treatment, storage and disposal facility.

EDS units have processed more than 2,300 items since entering service in 1999.

The Transportable Detonation Chamber (TDC) is a true explosive destruction system, as it uses the heat and pressure generated by an explosion to destroy the chemical fill of RCWM. The system has demonstrated the ability to destroy mustard, phosgene, chloropicrin, white phosphorus, smoke, and vomiting agents.

These systems have a DoD Explosives Safety Board net explosive weight rating of up to 60 pounds trinitrotoluene (TNT)-equivalent.

The TDC-60 has three main components: a detonation chamber, an expansion chamber, and an emissions control system. The personnel operating the TDC place a munition wrapped in explosives in the detonation chamber. The chamber contains material (e.g., pea gravel) to help absorb some of the blast energy. Bags containing water help absorb blast energy and produce steam, which reacts with chemical agent. Operators also add supplemental oxygen when destroying mustard agent. After the detonation, the resulting gases are vented to an expansion chamber, then to the emissions control system. The emissions control system includes a reactive-bed ceramic filter to remove acidic gases and to collect particulates such as soot and dust from the pea gravel. A catalytic oxidation unit oxidizes hydrogen, carbon monoxide, and organic vapors from the gas stream before venting the stream through a carbon adsorption bed and into the atmosphere.

In 2008, the TDC-60 unit successfully destroyed 71 munitions at the Schofield Barracks, HI.

In 2010-2011, the system was deployed to Columboola, Queensland, Australia, where it treated 144 mustard-filled munitions. 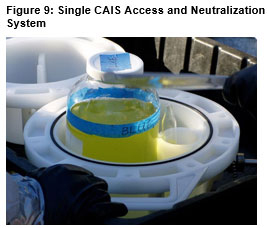 The Army expects to continue to recover CAIS items on an occasional basis through ongoing remediation and construction activities. The volume of the SCANS container is approximately one gallon, enabling treatment of small quantities of recovered CAIS items. CAIS items containing dilute blister agents and industrial chemicals are packaged and processed off-site as hazardous waste.Fact Sheet:

One of the goals of the DoD effort to eliminate all forms of chemical munitions and agents has been ensuring the residuals left after treatment are able to be recycled (e.g., decontaminated metal) or disposed of as solid or hazardous waste.

One specific example is the residuals from the treatment of CAIS. The Army policy contained in an April 24, 2007 memorandum from the Deputy Assistant Secretary of the Army for Environment, Safety and Occupational Heath (DASA (ESOH)) titled Treatment of Chemical Agent Identification Sets as Hazardous Waste, states that any industrial chemicals or dilute chemical agents (except dilute nerve agents) in a recovered CAIS are disposed of in accordance with applicable federal and state hazardous waste laws and regulations. Containers of neat (i.e., pure) chemical agents and any container of a nerve agent, must undergo treatment prior to disposal.