Native Americans in the Military 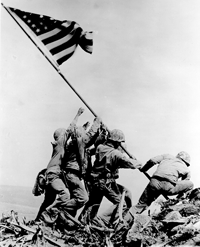 "…American Indians have proudly worn our nation’s uniform in every one of our conflicts…American Indians per capita—have had the highest percentage of their people in military service, exceeding every American ethnic group." 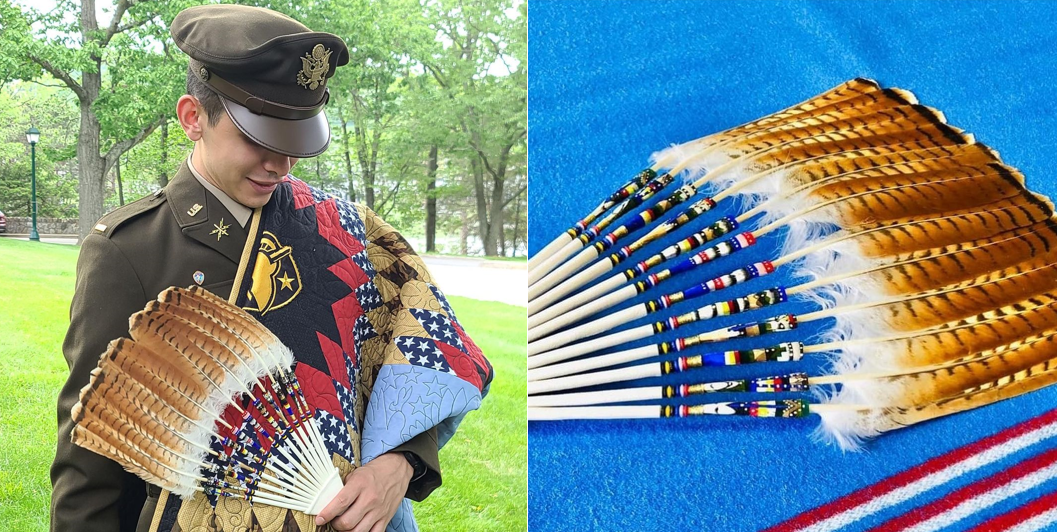 2nd Lt. Daniel Alvarado, received some very special gifts during his commissioning ceremony in May 2021. Daniel is part of the Winnebago Tribe of Nebraska, formally known as Ho-Chunk. His Native American name is Hiragija Wani'uga, which means "He Who Shields Them." In the Native tradition, feathers are awarded for doing something exceptional, so for his family and him, that was being accepted into #WestPoint. The feathers chosen are Red-tailed Hawk tail feathers, which are considered sacred. For graduating, Daniel's mother had his feathers made into a prayer fan, which he can use to pray by burning their tribe's tobacco or sage, and fanning it onto himself or onto whatever he is praying for. (Source: @westpoint_usma on Instagram)

The Medal of Honor is the highest award for valor in action against an enemy force which can be bestowed on an individual serving in the armed forces of the United States. This award is generally presented to its recipient by the President of the United States on behalf of Congress.

About the Medal of Honor 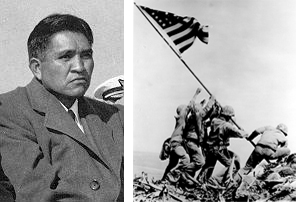 On Feb. 23, 1945 to signal the end of Japanese control, Ira Hayes and five other's raised the U. S. flag atop Mount Suribuchi on the island of Iwo Jima. Three of the six men were killed while raising the flag. This heroic act was photographed by Joe Rosenthal, and it transformed Ira Hayes' life forever. Hayes was a full blood Pima Indian and is buried in Arlington Cemetery.

Involvement in Every U.S. War

Early Wars (before World War I) 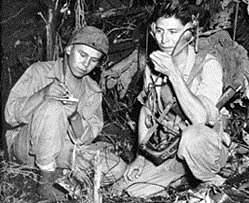 Cpl. Henry Bake, Jr., and Pfc. George H. Kirk, Navajos serving in December 1943 with a Marine Corps signal unit, operate a portable radio set in a clearing that they have hacked in the dense jungle close behind the front lines. Photo courtesy of www.archives.gov.

The idea to use Navajo for secure communications came from Philip Johnston, the son of a missionary to the Navajos and one of the few non-Navajos who spoke their language fluently. Johnston, reared on the Navajo reservation, was a World War I veteran who knew of the military's search for a code that would withstand all attempts to decipher it. He also knew that Native American languages notably Choctaw had been used in World War I to encode messages.

Articles and Reports of Interest

Taking up the charge given by Congress, the Smithsonian’s National Museum of the American Indian has established a National Native American Veterans Memorial on the grounds of the museum on the National Mall in Washington, D.C. Opened to the public on Veterans Day 2020, this tribute to Native heroes recognizes for the first time on a national scale the enduring and distinguished service of Native Americans in every branch of the U.S. military.

Why We Serve - Smithsonian Exhibition

Why We Serve honors the generations of Native Americans who have served in the armed forces of the United States – often in extraordinary numbers – since the American Revolution.  Native people have served for the same reasons as anyone else: to demonstrate patriotism or pursue employment, education, or adventure.  Many were drafted. Yet tribal warrior traditions, treaty commitments with the United States, and responsibility for defending Native homelands have also inspired the enduring legacy of Indigenous military service.

When the United States issued the call to arms in World Wars I and II, American Indians answered as warriors. Some men discovered that words—in their Native languages—would be their most valued weapons. Crackling over the airwaves and telephone lines, the code talkers' messages proved indecipherable to the enemy and helped the United States achieve victory in combat. Decades later, the U.S. government declassified the code talker programs, paving the way for the participants' long-overdue recognition.

Native Words, Native Warriors tells the remarkable story of Indian soldiers from more than a dozen tribes who used their Native languages in the service of the U.S. military. Developed with the Smithsonian's National Museum of the American Indian, this inspiring exhibition was made possible in part thanks to the generous support of Elizabeth Hunter Solomon. Additional support has been provided by the Smithsonian Women's Committee and the AMB Foundation.

A panel was held on the history of military service by Native Americans since the American Revolution, featuring American Indians who served in the armed forces during World War II, Korea, Vietnam, and Iraq. Mr.Emhoolah gave an opening prayer. Herman Viola gave a PowerPoint presentation based on his book Warriors in Uniform: The Legacy of American Indian Heroism. Slides were also shown during other presentations, some of which included drumming and singing. Chuck Boers presented the museum with a plaque of feathers he carried in the battle of Fallujah, Iraq. Jason Giles moderated. “Our Warrior Spirit: Native Americans in the U.S. Military” was held in the Rasmuson Theater of the National Museum of the American Indian. (2 Hours, 4 minutes)