What are PFOS and PFOA?

Perfluorooctanesulfonic acid (PFOS) and Perfluorooctanoic acid (PFOA), are two types of fluorinated organic chemical that are part of a larger group of chemicals referred to as perfluoroalkyl substances (PFAS).  PFOS/PFOA are commonly used in household items such as non-stick cookware, clothing, shoes, furniture, and carpets.

For context, one (1) ppt is equivalent to one (1) drop of water in 20 Olympic-sized swimming pools.

Since the 1970s, the Army has been using Aqueous Film Forming foam (AFFF), a firefighting agent used to suppress fuel fires.  AFFF contains both PFOS/PFOA and is commonly used by civilian firefighters as well.  The Army has ceased the use of PFOS-containing AFFF except for emergencies and is collaborating with Navy and the rest of DoD in its assessments of substitutes for PFOS containing AFFF.

Click on the infographic below to view the Army's PFAS Fact Sheet. 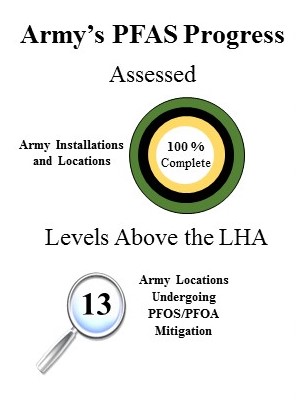