The Office of the Deputy Assistant Secretary of the Army for Environment, Safety and Occupational Health worked with federal, state and local agencies and the public to evaluate issues and concerns off of the Wai‘anae Coast (O‘ahu, Hawai‘i) relating to a shallow water discarded military munitions site, locally known as Ordnance Reef. The site is also known as Department of Defense (DoD) Sea Disposal Site Hawai‘i 6 (HI-06). Detailed knowledge of the site from past studies makes it an ideal location to test procedures and equipment for investigating and addressing munitions in the underwater environment. DoD performed several research projects at the site to: 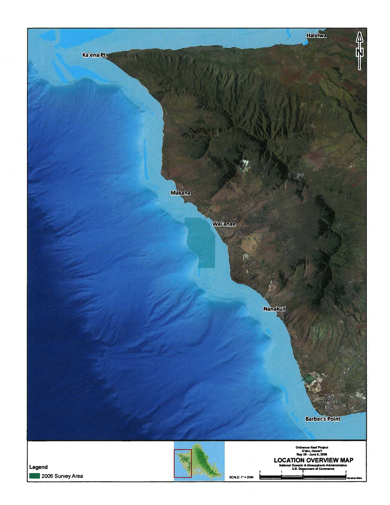 During a benthic survey of the Island of O‘ahu’s municipal sewage outfall diffuser in 1992 by the City and County of Honolulu, the oceanographic team discovered underwater military munitions (UWMM) between 0.25 and 0.5 nautical miles (0.5 and 1 kilometer) from the diffuser. In 2002, the U.S. Army Corps of Engineers had the U.S. Navy's Explosive Ordnance Disposal Detachment conduct an underwater survey to determine the location, quantities and types of UWMM at Ordnance Reef (HI-06). During the Explosive Ordnance Disposal Detachment survey, a variety of UWMM were observed between 60 and 160 feet (18 and 50 meters) deep including, but not limited to, naval gun ammunition, 105 and 155 millimeter artillery projectiles, mines, mortars, and small arms ammunition. All UWMM observed appeared to have been discarded rather than fired. Approximately 2,000 UWMM were identified by size and type (as discussed on the Environmental Investigations and Research tab, there are more recent counts of munitions). The Explosive Ordnance Disposal Detachment reported the munitions were discarded military munitions, not unexploded ordnance (UXO) because these munitions had not been (a) primed, fuzed, armed or otherwise prepared for action (use); (b) had not been fired, dropped, launched, projected, or placed in such a manner as to constitute a hazard to operations, installations, personnel, or material; and (c) did not remain unexploded, whether by malfunction, design, or any other cause. As such, these munitions did not pose an immediate risk to human health and the environment. These munitions are believed to have been discarded following World War II.

To date, the U.S. Army has invested significant resources to investigate the munitions present at Ordnance Reef (HI-06). Ordnance Reef (HI–06) has been the subject of multiple investigations; these include the 2002 Navy Explosive Ordnance Disposal survey of munitions, a 2006 National Oceanic and Atmospheric Administration (NOAA) screening-level survey, a 2009 University of Hawai‘i (UH) Environmental Study designed to fill data gaps in the 2006 NOAA screening-level survey, a 2011 Technology Demonstration, and a 2013 UH Follow-up Environmental Investigation.

Independent assessments of the 2006 NOAA screening-level survey’s results concluded there was no imminent or substantial threat to human health or to the ocean environment from either explosive hazards or a potential release of munitions constituents from the discarded military munitions. An assessment of the explosive risks determined that the greatest risk is from activities that deliberately disturb munitions. Other risks, such as dropping anchor, are considered minimal. The implementation of the 3Rs (Recognize, Retreat, Report) Explosive Safety Education Program minimizes the risk posed by the presence of these munitions. The 2009 UH Environmental Study included further evaluation of the potential risk to human health.

The 2009 Ordnance Reef (HI-06) Environmental Study found that human health risk associated with the consumption of seafood from the area with munitions was similar to that of other locations within the same general area. The exception was the “high-end” consumer, with the assumption that a “high-end” consumer eats seafood collected almost exclusively from the discarded military munitions stratum at Ordnance Reef (HI-06). This “high-end” consumer scenario is extremely unlikely, yet was chosen to assess the worst-case scenario for seafood consumption along the Wai‘anae coast.

The 2011 Ordnance Reef (HI-06) Technology Demonstration confirmed the remote recovery of UWMM has distinct operational advantages over the use of divers. Additionally, the use of remote recovery improves the overall safety of recovery operations and decreases costs beyond certain depths. The destruction of recovered munitions at sea is possible in an efficient, safe, and environmentally sound manner. The demonstrated technologies provide munitions response options that improve public safety, reduce the potential for damage to the environment, and remove explosive hazards without the risks associated with diving operations. Although recovery and destruction at sea is possible, the DoD Explosives Safety Board’s position remains that the safest approach is to leave the munitions in place, unless a determination is made that their presence poses an unacceptable risk to human health and the environment.

The 2013 Follow-up Environmental Investigation evaluated whether the recovery of UWMM during the 2011 Ordnance Reef (HI-06) Technology Demonstration had an impact on the concentrations of munitions constituents present in the marine environment. In summary, there were significant differences between pre- and post-technology demonstration sediment and biota data. Nonetheless, it is difficult to determine whether these differences resulted from the Technology Demonstration. In fact, the data collected suggest that there were other, unknown factors that may have contributed to these differences. While analysis of the sediment data did not explain the differences, it was apparent that sediment data was at least more consistent than the biota data. On the other hand, the biota data needed to be collected to determine the munitions constituents that might be ingested by humans.